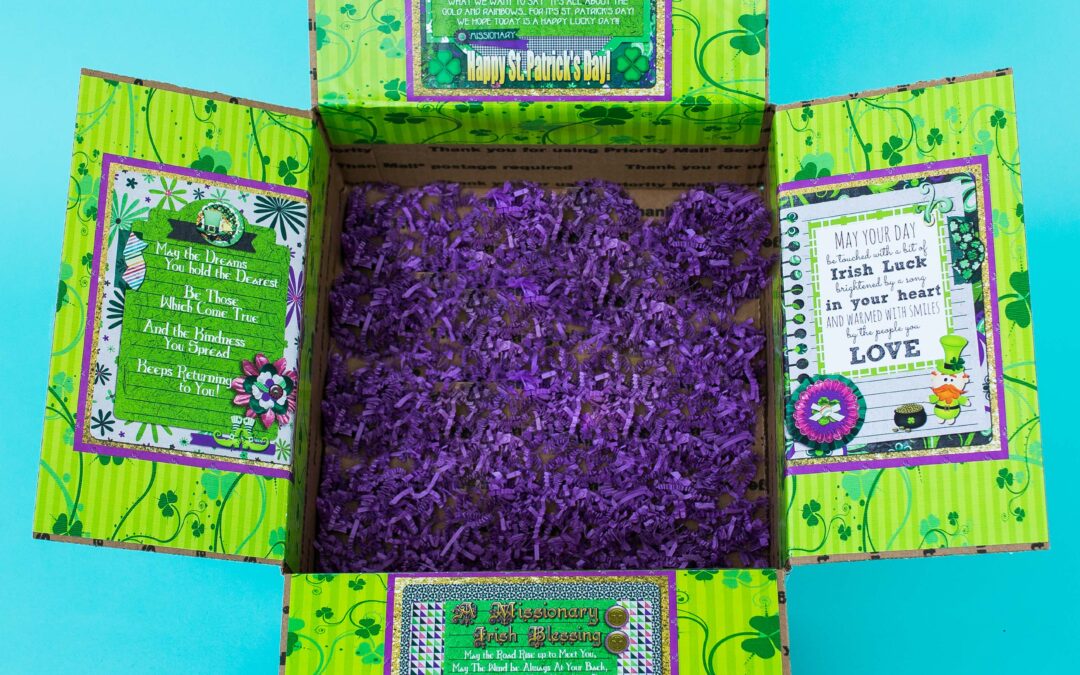 Sending Some Luck O’ The Irish to our Lads & Lasses seemed like a wonderful way to spread some Golden Leprechaun Cheer to our Missionaries this year!!!
This box was meant to lift their spirits with a Wee Bit O’ Spiritual all thrown in together to make our fabulous Pot O’ Gold!

We Love Missionaries and We Love Lucky Care Packages!!!

It is always fun to send our Kiddos a Care Package – but it is Super Fun to send a Box Full of LUCK and LOVE! Our theme for this box was ‘So Lucky!’

Your 19-Page Kit will include the following:

✔ 1-Introduction Letter with easy to follow instructions to help you put together the Perfect Care Package.
✔ 4- Large (11.5X8.5″) Adjustable Stickers to decorate your 4 box flaps of your shipping package. Just peel and stick! (These stickers are designed to fit a USPS Priority Mail Large Flat Rate Box and large UPS boxes. The stickers can also be easily trimmed to fit a USPS Priority Mail Medium Flat Rate Box as well as some Medium and Small UPS boxes or use your own box.) * Please note the kit does not include the actual box,
✔ 1-Box Introduction Letter to be placed in your Box right before you tape it up. This unique design lets your Missionary know the theme of your care package and that something special has been created just for them!
✔ 1-Page of Unique Envelope Designs that you can adhere to the front of your Letter to your Missionary and their Companion! This page is also printed on sticker paper – so you just need to cut them out and adhere to any envelope of your choice. It’s that easy!
✔ 1-Custom Missionary Letter for you to include with your personal Letter to your Missionary.
✔ 14-Pages with over 46 Custom Tags that Can Be Used Throughout Your Box as Desired

★ For Ideas to help you put together the perfect Missionary Care Package, how you can use each Printable, to find links to print General Conference talks and other stories to include in your box – look below!

Wherever You Go – Whatever You Do – May Good Luck Always Be With You!!!

Lucky to Have You!  We picked up the packing boxes for free from the US Post Office. We chose to mail this size of box simply for economy – since all of our Missionaries were serving outside of the United States – it was just a few dollars more for us to send a Large Priority Box (12X12X5) vs. a Medium Priority Box.

Leprechaun Letters!!! One thing we always included in all of our Missionary Box Mom Boxes was a personalized letter to each Missionary from each Mother. Inside our letters we included our testimonies, the reason we chose that particular item to include in the box, along with uplifting messages filled with love. A lot of the items won’t make much sense as to why you are including them in the box unless you explain how it specifically applies to your Missionary and to Missionary Work. Many times over I have received thank you letters from our Missionaries – but the things they thanked us all for the most was the letters we included. It’s just a little piece of ‘Home’ in a box! So don’t forget to write! 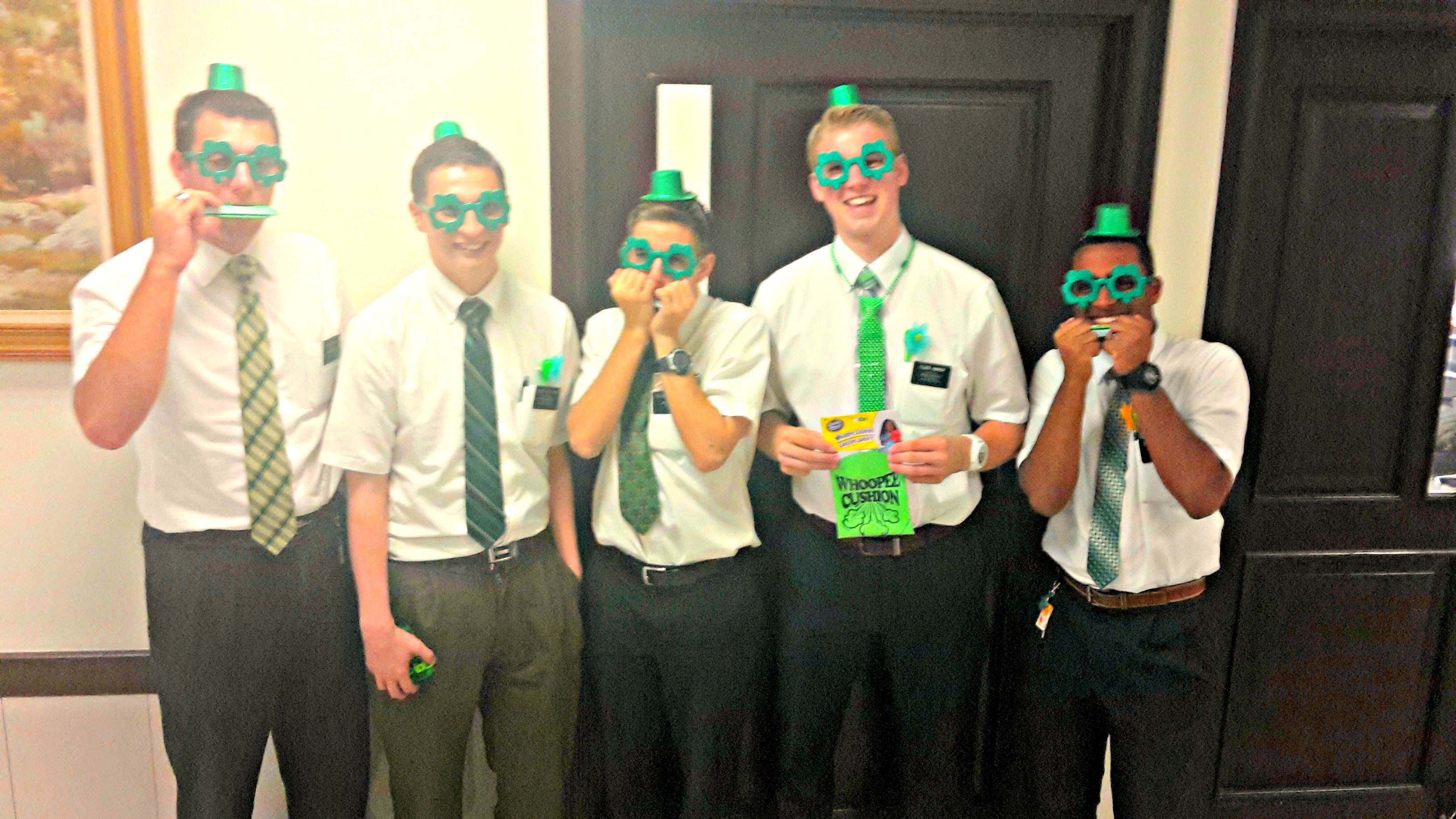 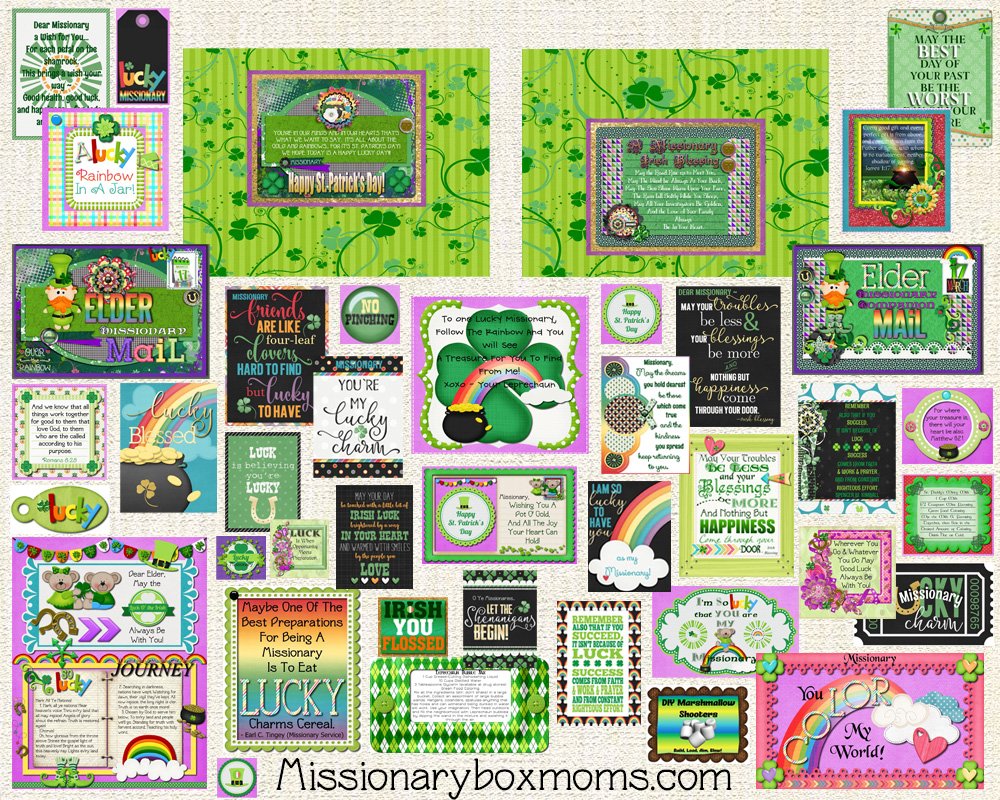 Four Leaf Clovers: As we decided on each ‘Missionary Box Theme’, which we based around a scripture or missionary teaching idea, we would then brainstorm fun ideas that could be included in our box. It honestly might have been just as much fun for us to build these boxes as it was for them to receive them!

Depending on the size of the box you are sending – you could include or delete any of the following items – or come up with a few of your own. We tried to make sure that most of our items could be used to enhance missionary discussions, to be given away, to decorate their missionary apartments and left for future missionaries when they moved on, or simply eaten and enjoyed. But of course there were always a few that were just for fun!

Romans 8:28 And we know that all things work together for good to them that love God, to them who are the called according to his purpose.

D&C 58:27 Verily I say, men should be anxiously engaged in a good cause, and do many things of their own free will, and bring to pass much righteousness;

D&C 58:28 For the power is in them, wherein they are agents unto themselves. And inasmuch as men do good they shall in nowise lose their reward.

DIY Marshmallow Shooters!
Sometimes even missionaries need to blow off some steam and have a little fun, and what’s more fun than a homemade marshmallow shooter?! Your missionary will love it!
The best part, these are super cheap to make! The PVC supplies should cost you around $2.50 for each shooter, when you add the cost of the marshmallows you have a fun gift that only costs about $3.50. They are simple to make too! Plus, they don’t weigh a lot or take up much room un-assembled – which makes for easy mailing! 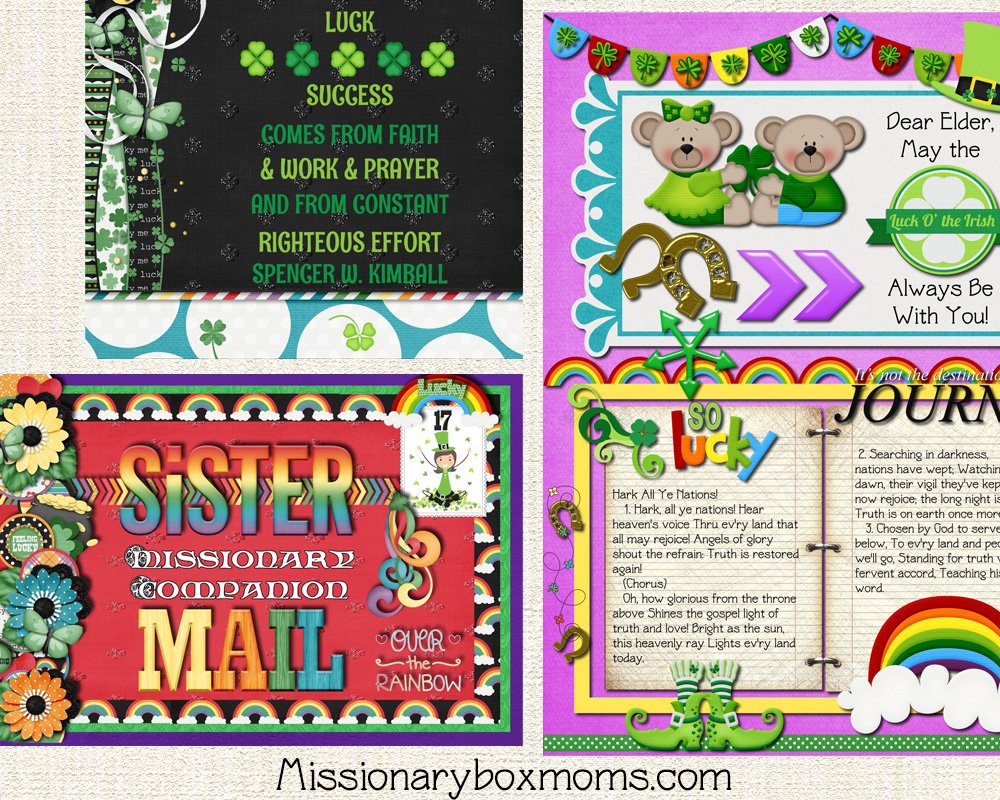 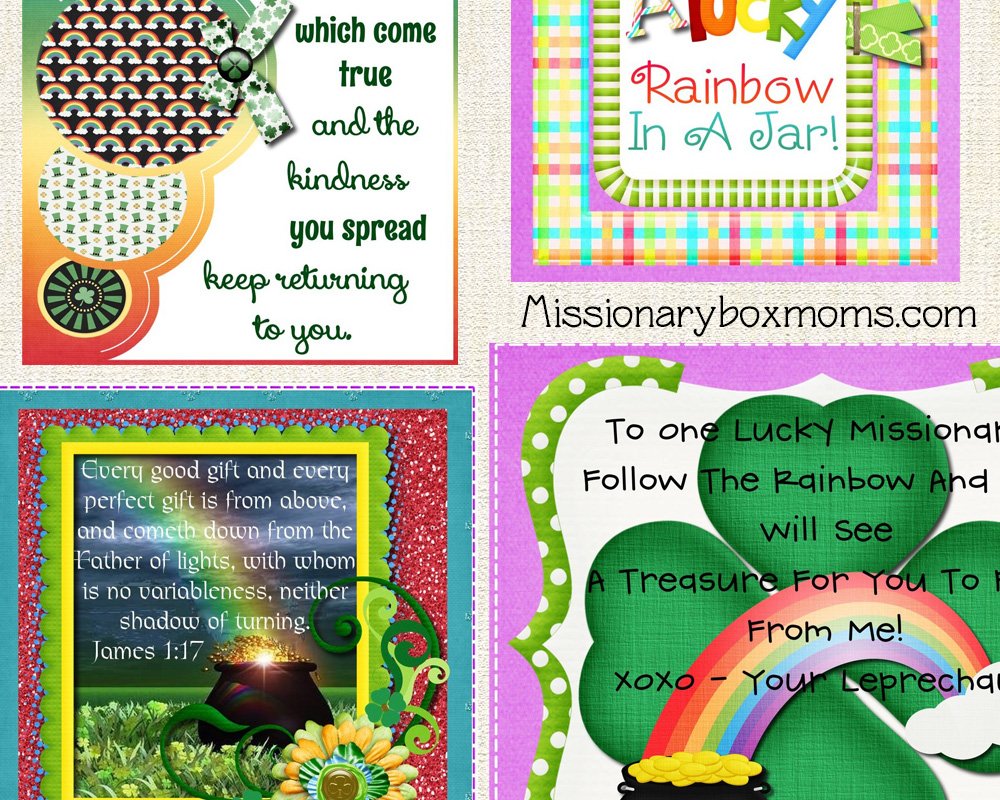 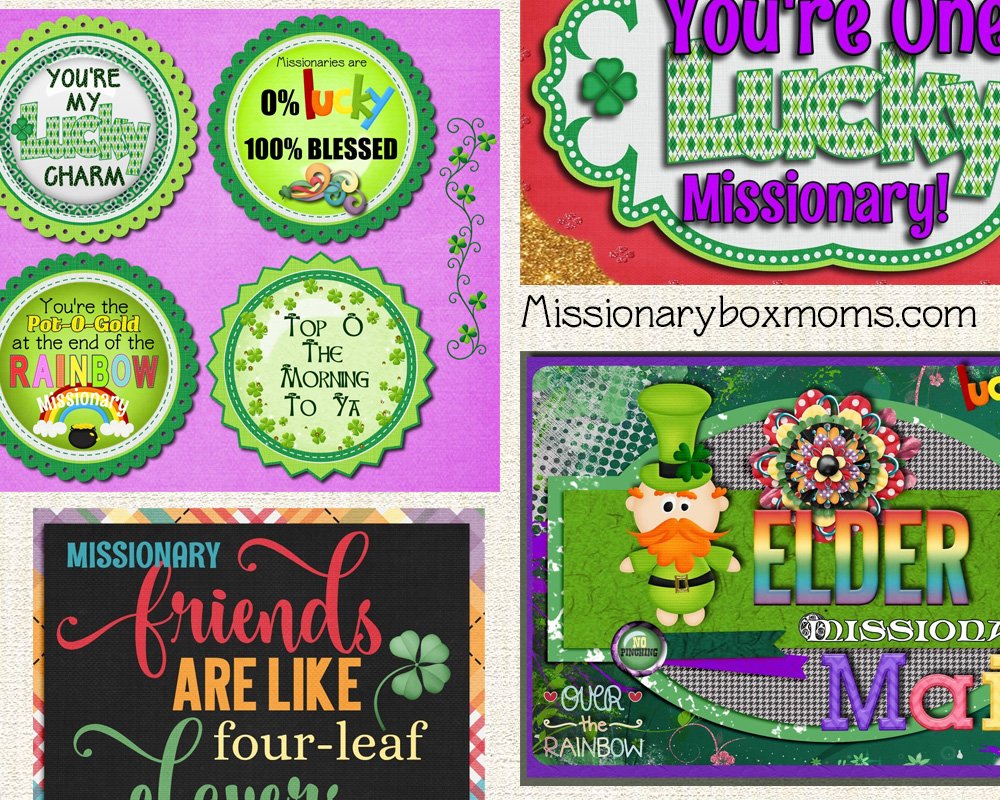 Skittles candies come in many colors and flavors – plus they travel well when shipped – so they make the perfect bright Rainbow In A Jar treats! Add in some chocolate coins or Rolos candies and Voila! You are Golden! You can choose what you want to put them in – whether it be a canning jar, a green draw-string pouch, plastic tube or sleeve. All of them will turn out just splendid! 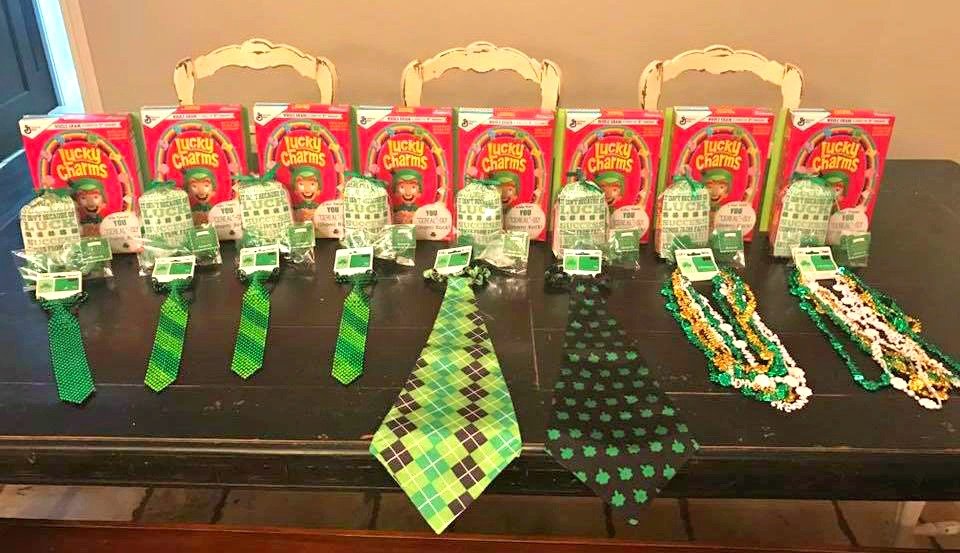 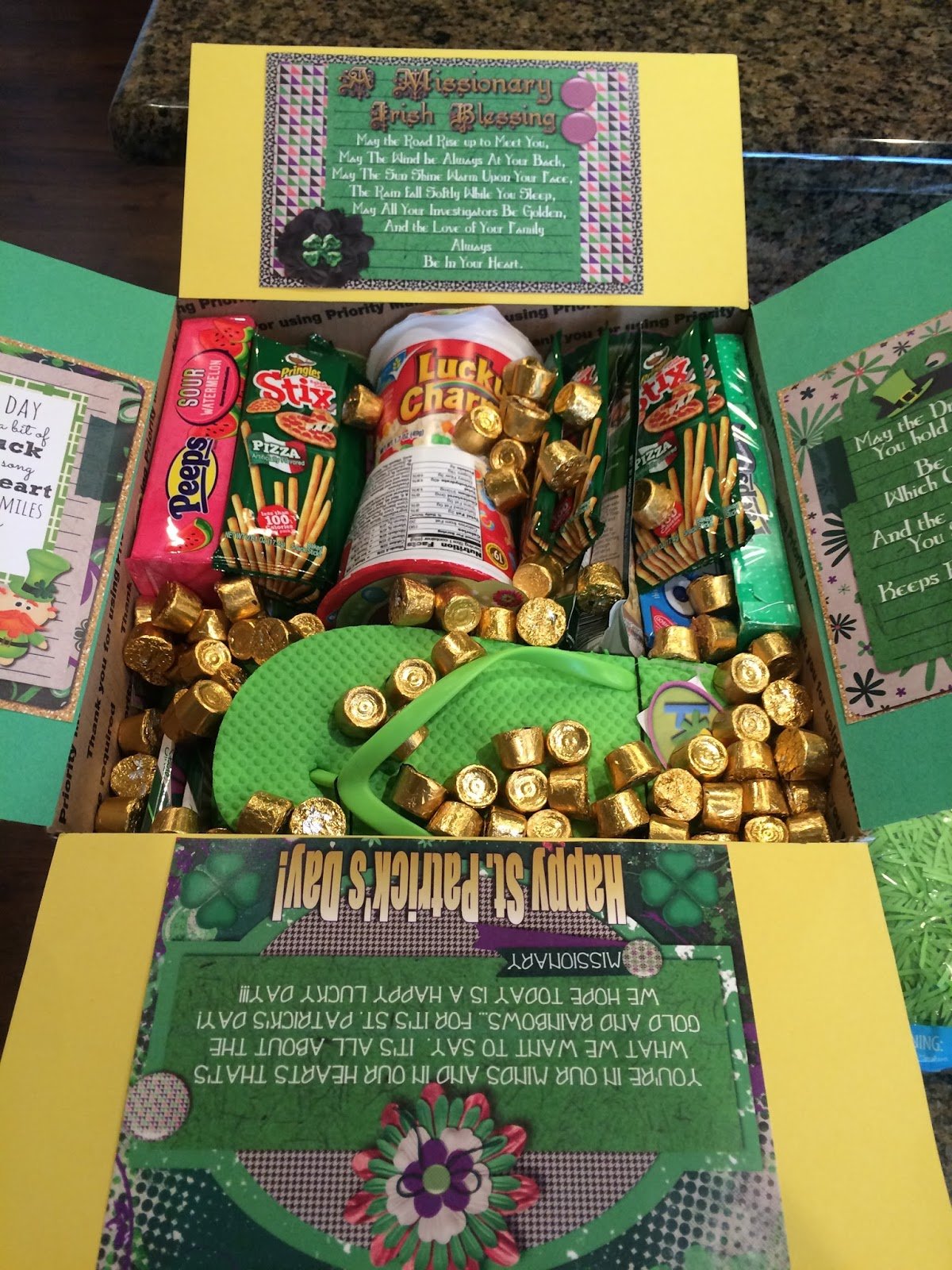 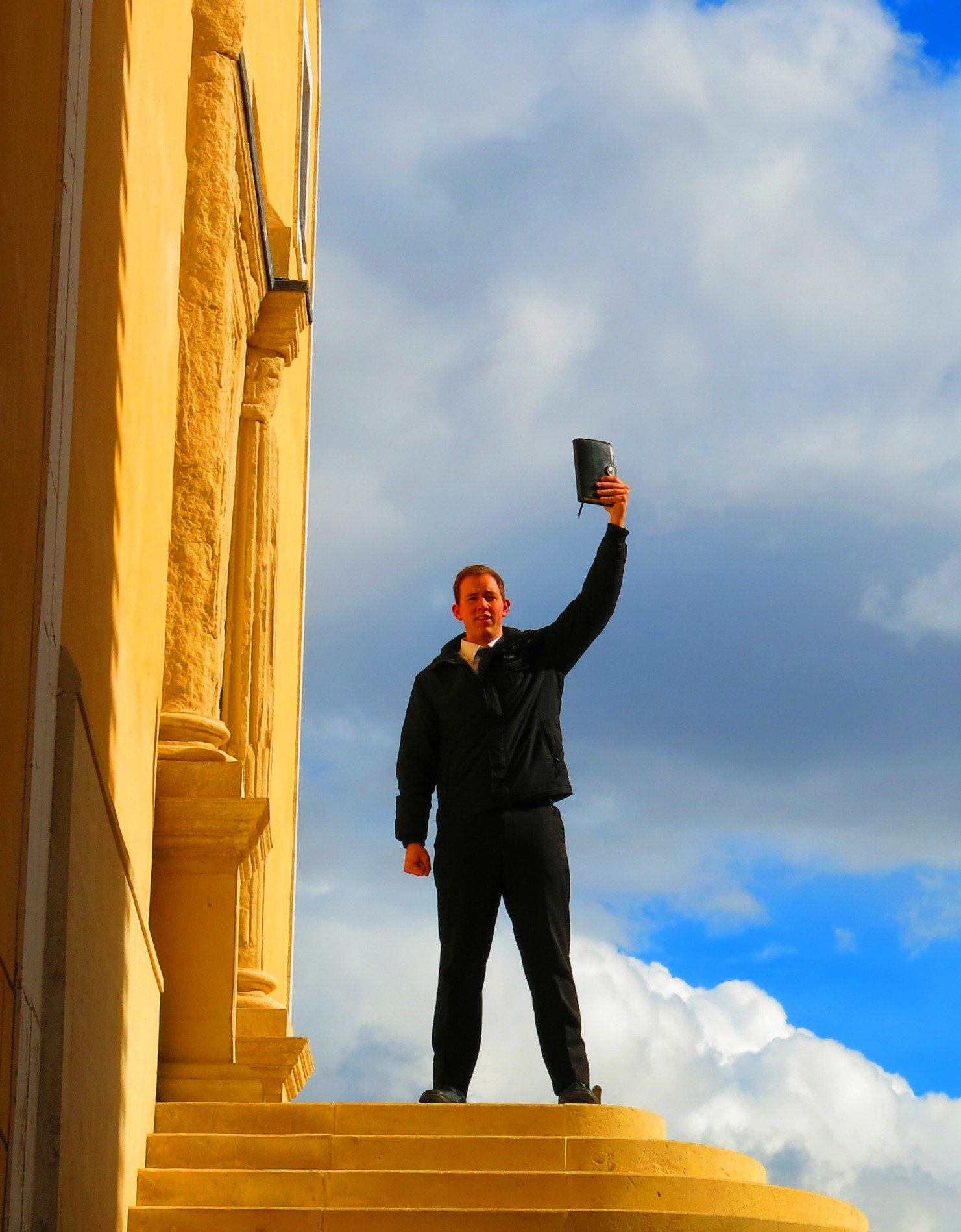 Sound – Reliable
Aye – yes
Dead on – That’s good
Grand – Fine, Okay
Top ‘O the Morning to You – Greeting
So it is – used at the end of many sentences
Scunnered – Ticked Off
Red Sauce – Ketchup
White Sauce – Who knows but they use it a lot
Brown Sauce – Gravy
Wee Dumpy Article – A Homely Person
Wee Fizzy Mineral – Soda
Have a greedy gut – Eat too much/full
Egit – Silly Person
Putting the fool on them – Hitting on them
Rashers,Bangers – Sausage
Pissing – Raining
Booking – Puking
Champ – Mashed Potatoes
Airlocked – Drunk
Ya – You, Ye – Yous (and yes… they say “yous” regularly)
Class – Good
Good Craic – A good time
A Bad Egg – Bad person
Foothpath – Sidewalk
Moggy – Sad
Boggin, Mucky – Dirty
Shopping Trolley – Shopping cart
Dummy – Pacifier
Trainers – Running Shoes
The Boot – The trunk of the car
The Bonnet – The hood of a car
You’re frying my head, You’re wreckin’ my head – Annoyed
Not the sharpest knife in the drawer, Sandwich short of a picnic – Dumb 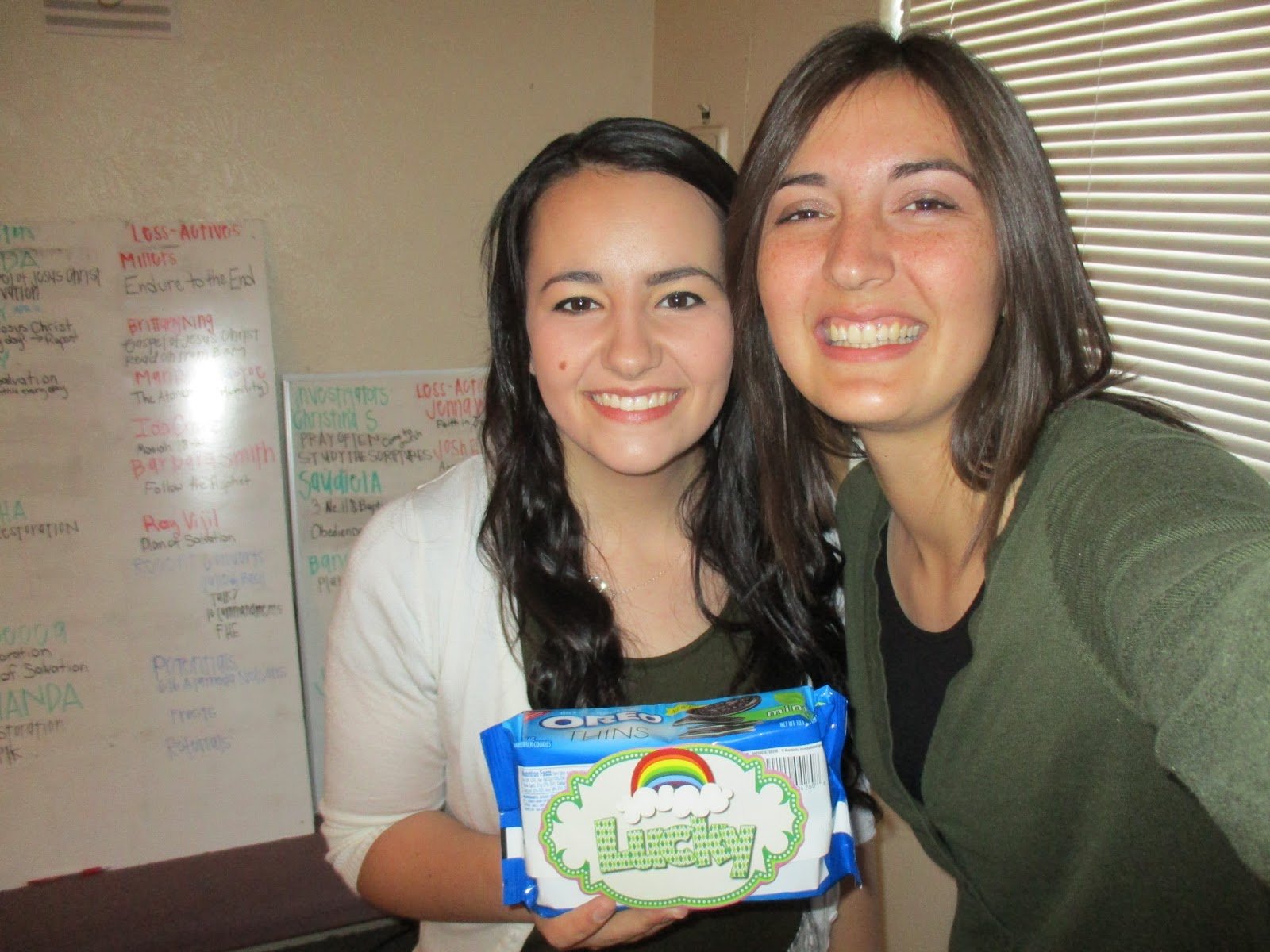 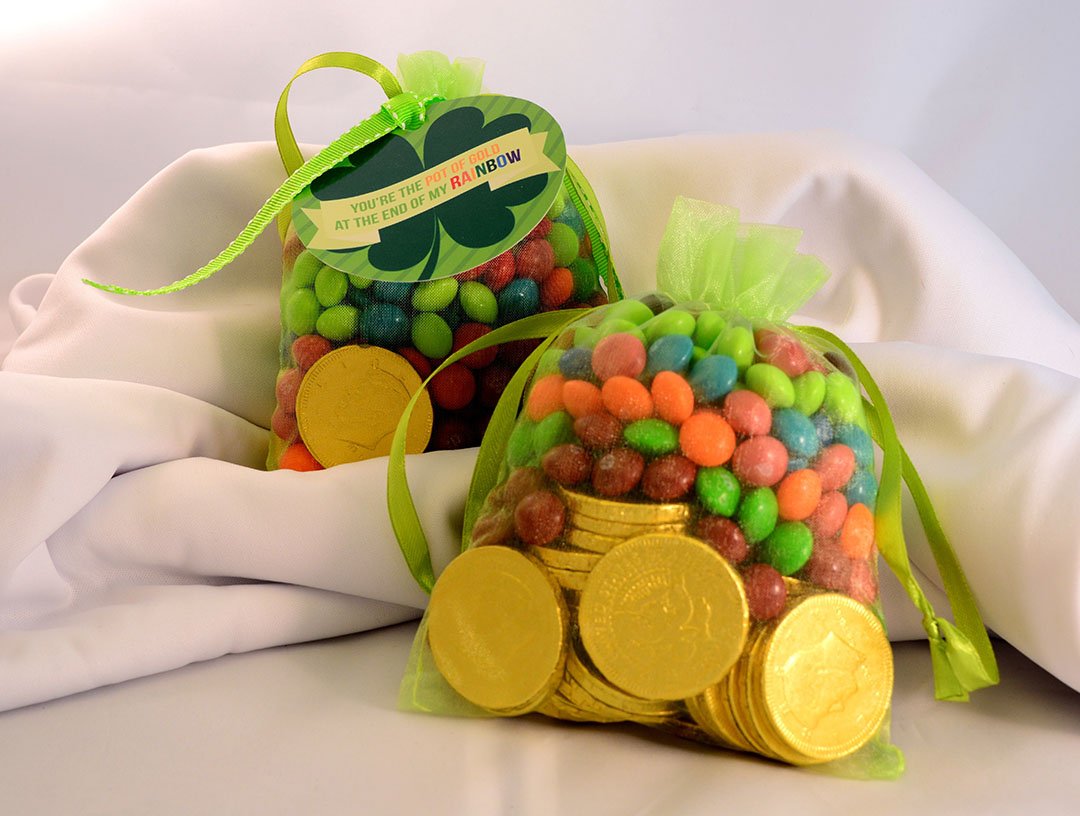 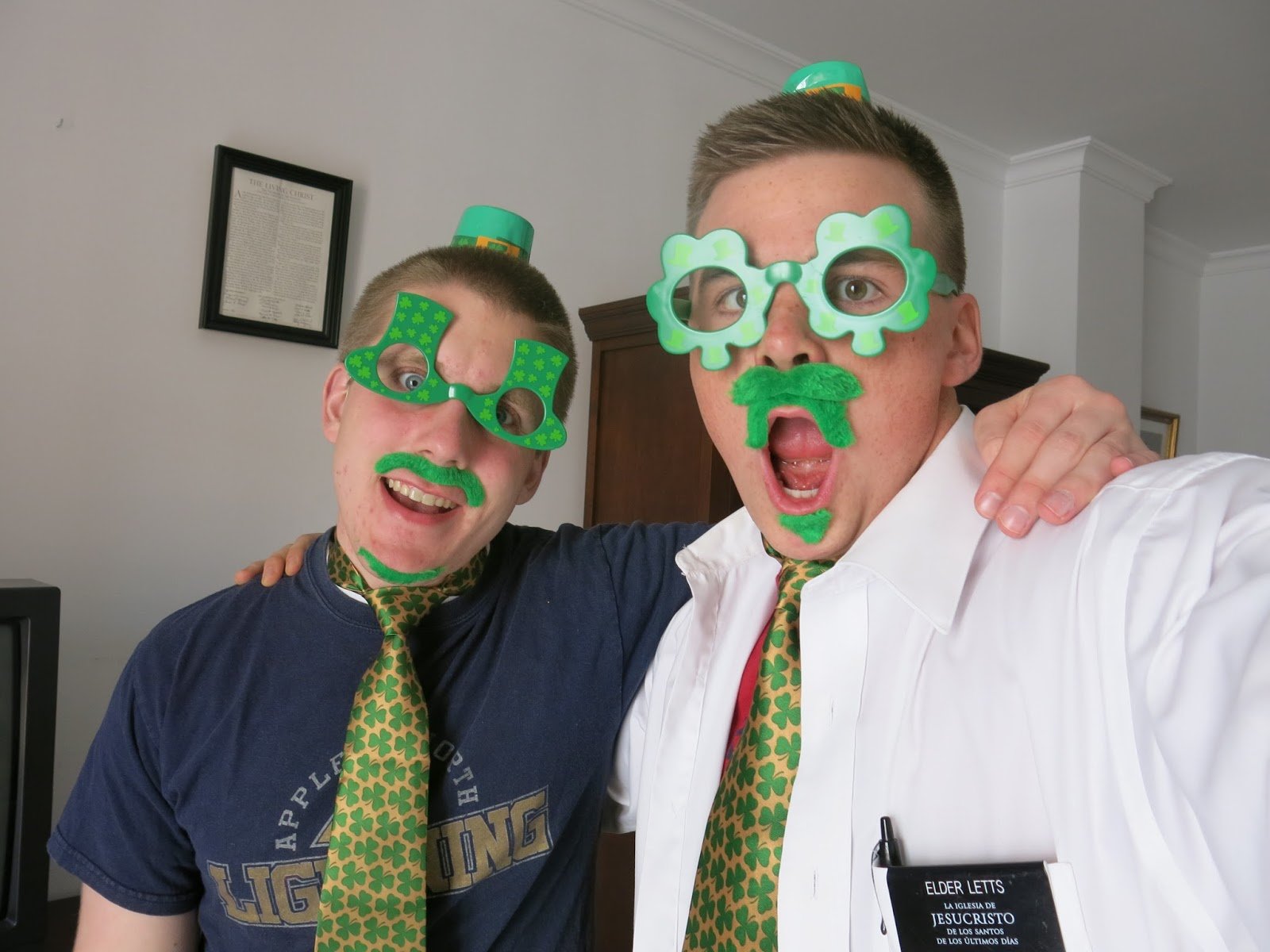